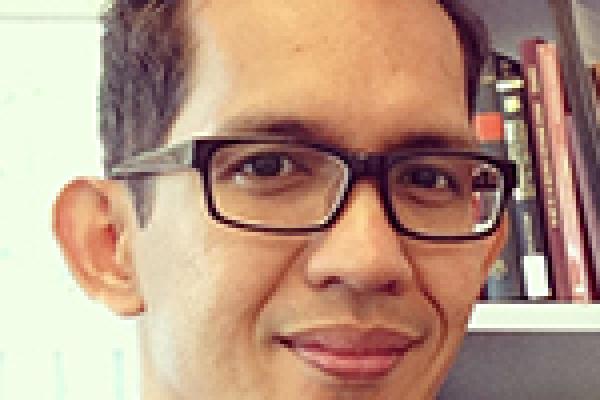 Nur Amali Ibrahim is an assistant professor in the Departments of Religious Studies and International Studies at Indiana University, who works on Muslim youth social movements in Indonesia, and how they experiment with new forms of Islam in relation to post-dictatorship democracy. He earned his PhD in Anthropology from NYU in 2011 and was a Harvard Academy for International and Area Studies postdoctoral fellow at Harvard University's Weatherhead Center for International Affairs. His talk, entitled "Accounting for the Soul: Religious Improvisation in Democratic Indonesia," emerges from his forthcoming book, Improvisational Islam: Indonesian Youths in a Time of Possibility.

Accounting for the Soul: Religious Improvisation in Democratic Indonesia

There has been a proliferation of religious improvisation in Indonesia since a longstanding military dictatorship was replaced by a secular democratic government in 1998. These improvisational acts mediate the encounter between Islamic and secular liberal ideals, leading to the formation of hybrid religious forms. An example of these hybrid forms is the adoption of the accounting book for purposes of inculcating piety in conservative Islamist groups. Islamists, who have emerged as a leading proponent of anti-corruption in democratic Indonesia, have embraced a culture of transparency. Within the cell groups that serve as the movement’s main pedagogical venue, participants have their performance of religious rituals recorded daily and audited weekly. This hyper-vigilance is a safeguard against inauthentic displays of piety associated with the military dictatorship—anti-Islamic for most of its rule, only to suddenly turn pious as opposition to it surmounted. But accounting technologies often fail at producing honest subjects out of the targets of audit, who inadvertently learn how to game the system. Faced with too many religious rituals to perform each day, participants in the Islamist cell groups devise manipulations of the daily ritual performances in ways that enable them to still pass the weekly audit. Such micropractices of chicanery offers important insight into the conundrums of being Muslim in a world saturated by the power of the west and the ideals of secular liberalism it imposes on the non-west.

Co-sponsered by the Department of Comparative Studies and the Center for the Study of Religion.