Christiane Gruber: They Are Among Us: Gezi Martyrs, Affective Incarnation, and Resistance in Contemporary Turkey 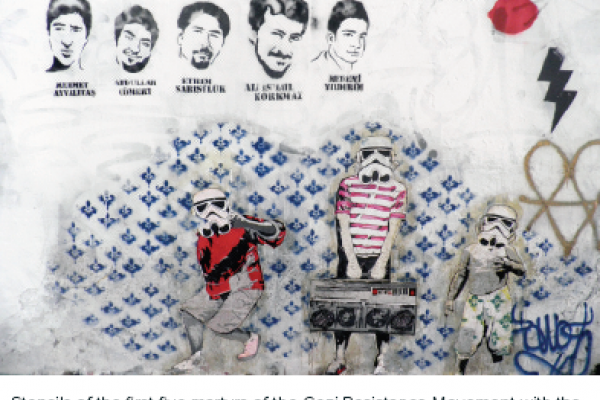 Register here for this event

Christiane Gruber is Associate Professor of Islamic Art at the University of Michigan, Ann Arbor. Her research interests span medieval Islamic art to contemporary visual culture. She has authored two books on Islamic texts and images of the Prophet Muhammad’s ascension and has edited several volumes on Islamic book arts, ascension texts and images, and visual and material culture.

Her research has been supported by numerous grants, including the Max-Planck Foundation, the Mellon Foundation, the Council on Library and Information Resources, the National Endowment for the Humanities, the American Research Institute in Turkey, the American Institute of Iranian Studies, the American Research Center in Egypt, and Fulbright-Hays. Her next book on the visual culture of the Gezi Resistance Movement was award a Guggenheim fellowship this past academic year.

In early June 2013, Gezi Park became the staging ground for the most serious challenge to Recep Tayyip Erdoğan’s decade-long rule in Turkey. When police brutally cleared the Istanbul park of peaceful environmentalists, a massive popular uprising was spawned, lasting to the present day. Quickly five young men became the official “martyrs” (şehitler) of the Gezi movement. As violence claimed the lives of these young men, an important question thus arises: what are the symbolic framings and functions of martyrs in a pluralistic consortium, whose contours are largely shaped by a desire to preserve a secular, representative democracy in the face of increasing authoritarianism displayed by the ruling Islamist AK Party?

In order to answer such questions, this talk explores the rhetorical strategies and visual output that the Gezi Movement produced in Istanbul during 2013-14. In slogans, chants, graffiti, digital art, Twitter posts, posters, banners, stickers, processions, sit-ins, and performances, the five martyrs are described as “immortal,” whose deaths must be accounted for by the “killer government.” Emphasizing the notions of innocence, immortality, and omnipresence, Gezi rhetoric about death engages with older Islamic religious beliefs and martyrial traditions while also constructing a new mythic reality within a largely secular register.

In addition, these martyrs became the embodiments of the Gezi Resistance and its major aims. They symbolized the need to reclaim justice, insisting that the government be held accountable in its social contract with all of its citizens. Sparking grief and sorrow, these martyrs became the focal points for the expression of personal emotions while also contributing to the creation of Gezi’s laic rituals, in which the figure of the martyr provided, first and foremost, undeniable physical evidence for the loss of human life via the breakdown of the rule of law.